Tattoos date back to at least 2,000 B.C. when Egyptians modified their bodies with ink. Cavemen from 4,000 B.C. found in the Ötz valley of the Alps reveal that the practice was more widespread than one would think.

But what are the modern day health risks of tattoos?

Recent surveys estimate that more than a third of Americans in the 18-29 cohort, 24% of those in the 30-40 bracket and 15 percent of those aged 41-51 bear tattoos. That’s more than 40 million tattooed Americans! Since the nineties, tattoo parlors have become one of the fastest growing retail sectors, but is tattooing really safe? 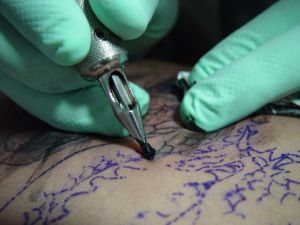 Here are the top risks you need to consider before presenting your bare flesh to be inked upon:

Given the available data, we can conclude that getting a tattoo does pose some risks, but the procedure is actually quite safe if the proper sterilization and health guidelines are followed. Perhaps the biggest danger of getting a tattoo is regret! About 6 percent of people tattooed say they regret the decision because: they were too young (20%), it’s permanent and they’re marked for life (19%), they don’t like the tattoo itself (18%) or the tattoo has faded (16%). So as you prepare for your next piece of body art, keep yourself safe by finding a licensed tattoo artist who can show you safety inspection documentation and a solid portfolio of tattoos that don’t suck!